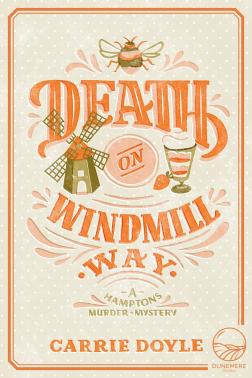 Recently transplanted from California following a nasty divorce, 35-year-old protagonist Antonia Bingham has bought the Windmill Inn from the estate of Gordon Haslett,who died suddenly, apparently from a heart attack. An inventive, passionate chef, Antonia has just reopened the inn's restaurant when she learns from two of her regulars, Len and Sylvia Powers, that the circumstances surrounding Gordon's death were suspicious. Worse, he wasn't the first owner of the inn to experience an untimely death. Now, strange things are happening to Antonia--someone removes a stepladder while she's installing a light bulb, someone locks her in a supply closet, and more. Her new buddy, Joseph Fowler, a 60-something widower, joins in the amateur sleuthing as they try to sort out the possible motives of a multitude of suspects; Gordon, they discover, was universally disliked.

“Doyle (The Infidelity Pact, 2008, etc.) is a self-described “foodie” and an avid cheerleader for the quaint village of East Hampton, New York . . . an appealing, three-dimensional heroine and some clever plot twists make this an enjoyable, quick read.”  —Kirkus Reviews

“Death on Windmill Way is an entertaining mystery that will keep audiences guessing right up until the end. Fast-paced . . . alive with secrets, intrigue and murder.”  —Foreword Reviews

"There’s something fun about discovering a series that you love and just binging your way through it. That is exactly what I did with Carrie Doyle's Hamptons Murder Mystery series. The books are fun reading with a great cast of characters...[and the] storylines weave in great background on the history of the Hamptons, as well as some mouth-watering food descriptions. Carrie worked for Ina Garten when she owned and ran The Barefoot Contessa in the Hamptons, so she writes about food with great authority. She also has been a summer and weekend resident of East Hampton for decades, so she knows the lay of the land. Armchair vacation travel with a mystery; I love it." —Bookreporter.com

"The story is captivating...a mystery/murder story with several twists and turns." —Long and Short Reviews